I recently finished a fan fiction,  The X-Files: Ground Zero by Kevin J. Anderson.  I thought I would review it quickly for other X-Files fans.  Especially now since there's talk about new special episodes possibly being released. 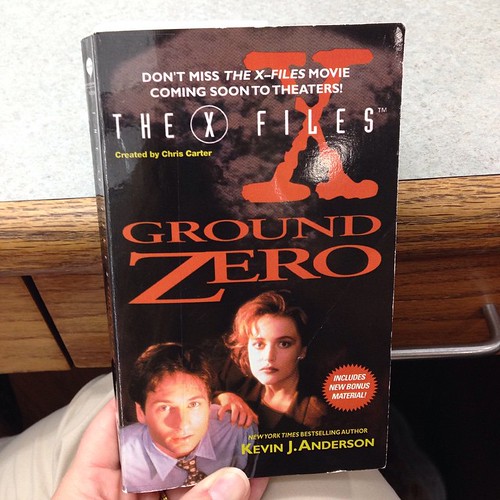 The basis of the story incorporates known nuclear bomb testing sites and a contemporary (1990s?) day test.  It seems to be a very cut and dry case, but don't worry all of the typical conspiracy and paranormal comes into this tale.  I will say no more.

I found the first few pages hard to get through, but it might have been my circumstances- I was on a work trip.  My mind was buzzing about all kinds of digital repository terms.  It had the same layout as an episode with an added bonus.  With this being a novel, the reader has insights into Scully and Mulder's thoughts as well as dialog.  This one focused a lot on Scully.  Scully stays a mystery to an extent in the television series.  This novel expanded on her youth and some of her rebellious collegiate days. Oooo, drama.  Okay, as dramatic and rebellious  as Scully gets which is as one would expect- not much.  The sexy interaction between Scully and Mulder was missing though.

David Duchovny folds outs would have made this book a best seller.  Just saying.

Go find this book. Read it. Find out the truth.
Posted by Pandora at 1:41 PM No comments:

I forgot how easy it is to cross stitch.  Of course, I'm not doing a bajillion color changes or anything intricate. And, I'm not showing the backs....it's a hot mess.

I finished R2-D2 last night completely and have C-3PO's main color all finished. 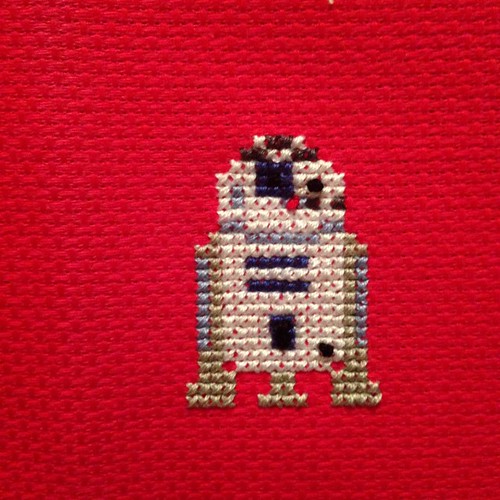 I'm attempting to buy as little as possible for these. So far, so good.  I'm just getting close on some of the colors and using what cross stitch fabric I have on hand.  That's why the droids are on red.  It was the only color that did not clash too bad.

Posted by Pandora at 7:15 AM No comments:

Pandora
My name is Natalie and I live in a southern state. This blog is mostly for knitting and other hobbies. To see a full details about my Blythe dolls see www.pandorasdolls.blogspot.com. I collect all three sizes of Blythe- Neo, Middie, and Petite. They all are charming in their own way. I design knit-wear for all three sizes as well. Besides crafting and collecting dolls, I work in a library as an university archives assistant. I have a bachelors in fine arts and a masters in library science.

Where to find me